The Murals of San Isidro in homage to Miguel Hernández will be held on April 5, 6 and 7 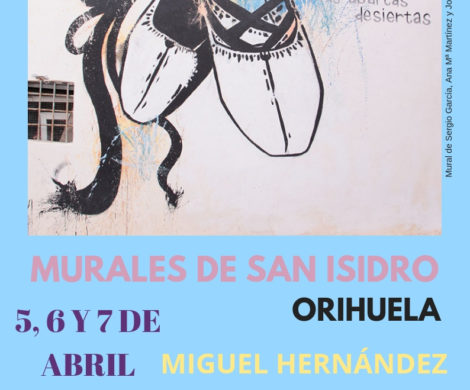 One of the most important cultural events of the year in homage to the poet Miguel Hernández that is celebrated in Orihuela already has a date. The Murals of San Isidro will be held on April 5, 6 and 7, as announced this morning by the Department of Culture.

This new edition of the Murals of San Isidro will open with a free concert on Friday night in the hermitage of the neighborhood by the singer Canijo de Jérez, known for being the voice, as well as guitarist and composer of the flamenco band -rock Los Delinqüentes and will have more than twenty new facades to paint.

Thus, On April 5, 6 and 7, the neighborhood of San Isidro will again host the great tribute to the poet Miguel Hernández in its streets with the celebration of the murals. The Department of Culture is already developing a broad cultural program that will include the Futsal Tournament with the name of ‘Murales de San Isidro-Miguel Hernández’, which will be coordinated by the Popular Football Club Orihuela Deportiva.

In this new edition “we will have a score of new facades to paint, so we will expand this open-air museum with new images and will rehabilitate others already painted in previous years”, have confirmed from the Department of Culture. The new facades donated by the residents of the neighborhood will be published on Wednesday March 20 on the page of the Department of Culture: www.cultura.orihuela.es and the City of Orihuela www.orihuela.es

From the same Wednesday and until Tuesday, April 2, the artists that want to participate will be able to choose the available facades and send their artistic project. As in previous years has enabled the email muralessanisidro@aytoorihuela.es through which artists interested in participating in this new edition can contact the Department of Culture.

“We want to turn San Isidro into an authentic celebration during these three days in tribute and remember the poet Miguel Hernández, present in these streets and the undisputed protagonist of this neighborhood. For this we are finalizing an extensive and very participative cultural program in which we will have musical groups and dj’s of the city entertaining the streets, bands of the municipality, theater groups … “have confirmed from the Department of Culture, from where they have thanked the Neighborhood Platform of the San Isidro neighborhood, its president Ana Lizón, her “involvement, her work and above all her enthusiasm and commitment to this activity that fills the streets of her neighborhood with culture every year” and the Foundation Cultural Miguel Hernández, whose director, Aitor Larrabide, has been working for months with the council for the organization of this important event.